I left Denmark the 21st of august to start the scholarship program in South Korea. My flight was scheduled together with some fellow KGSP students so we met at Amsterdam Schipol (where I had my connection flight) and started to get to know each other there. We all booked different seats on the flight to South Korea so we didn’t talk much during the 9 to 10 hours of flight. When we arrived at Incheon International Airport, we waited for each other to make sure that everyone made it out safely. Pai Chai University had informed us about the pick-up at the airport before arrival so we didn’t have a hard time finding the people waiting for us. After the long travel, I was hoping I would be able to get to the dormitory and rest as soon as possible, but we found out that the next school bus to Pai Chai University would approximately arrive in 6 hours. I was devastated but there wasn’t much to do about it. I understood that they couldn’t operate the buses that often since people arrive at different times of the day, so we simply waited. During our time at the airport I talked a lot with Cindy (who writes the monthly music pick on this blog) whom I met in Amsterdam. Her efforts in trying to keep me awake were in one word, impressive. When the bus for Daejeon arrived, I was so happy that I didn’t even pay attention to the fact that I was exiting the airport with the idol-group EXID. The bus ride to Daejeon took around 3 hours and when we arrived at the dormitory it was already midnight. When I realized that our dormitory was on a hill (or at least semi-mountain), I was slightly disappointed since one of my Korean friends clearly told me that Daejeon was the flattest part of the country. I had to write and tell her that her information source was wrong! Everyone was accommodated in the Paitel A dorm and told that the majority of the people would move to Seojaepil after the university orientation. I was hoping to get Cindy as my roommate since we were told that we would stay in PA and not move to Seojaepil but we were not in the same room. We were still in the same flat though so I was happy nevertheless. When we arrived in the rooms I was so happy to finally see a bed but when I realized it was a bunk bed my dreams were slightly crushed. I wanted to just grab my pyjamas from inside the luggage and sleep but I realized that I hit the point where I couldn’t fall asleep anymore so I decided unpack instead. In addition to the humidity making it difficult to fall asleep, the air-conditioning was also making the room too cold and I didn’t really have a blanket, but not having much choice, I slept like that until morning.

(View from our PA room)

The next day, we (Cindy and I) decided to go on our first and definitely-not-last Daiso trip. Daiso is a store where you can find stuff for everyday living for cheaper prices. The quality can be questioned but it is cheap and that’s what we need as students on a scholarship. We also had our first Korean meal, a simple yet oh-so-tasty Bibimbap. 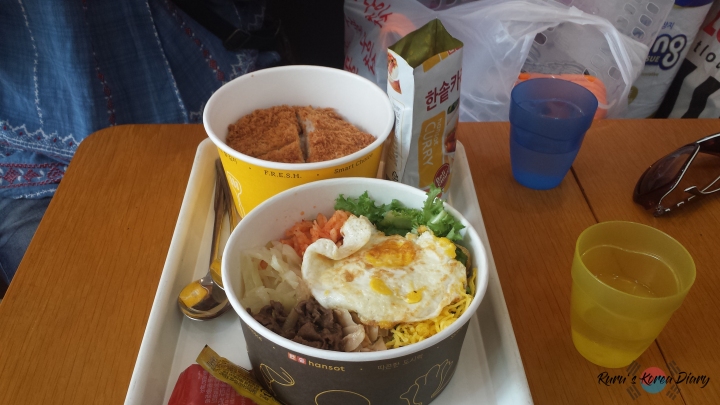 Still feeling tired from our long trip, we couldn’t force anything else into our bodies. We started slowly settling down then went out to discover Daejeon the next day.

On the 26th of August we had our orientation at the university. We received a welcome package containing the most important papers for our stay and took a seat inside the orientation room. During the orientation we received useful information, such as the class hours being from 9 am to 1 pm, and that we would have additional TOPIK classes (4 hours/week) during the semester. We were told that we would have cultural activities during the semesters as well. According to the NIIED regulation, we have to get level 3 within a year but the school explained that if we were at least successful in getting a score above 87 on the TOPIK II, we would be given a second chance by continuing another ½ year at the language institute (taking into account that this would mean receiving a warning from NIIED and paying 50% of the tuition from our own pockets). We also received information about housing opportunities outside of campus during the orientation. Pai Chai is one of few universities which provides apartment-housing opportunities for international students, so we were told that we could apply if we wanted. The dormitory rules were also explained during the orientation. Information about the Alien Registration Card (ARC) and student ID was also provided during the orientation. We also received information about another health check-up at the university, which was scheduled to take place the day after the NIIED orientation on the 29th.

Our Korean language placement tests took place right after the orientation. The test wasn’t that difficult but it had been so long since I studied Korean or the Korean ways that I was taken a bit aback. I answered the parts I could and handed in the test. We were scheduled to meet up with our mentor group after the placement test so I went on to find our mentor. After everyone finished the test we went to the international office to hand in our Alien Registration Card application and paid the fee directly with the application form. Pai Chai University took care of the rest of the process. Thereafter we went to the student support center to apply for a student ID card, which would be used to get into important buildings such as the dormitory and the library. The final stop was the bank but we didn’t make it in time so we only got the papers we had to fill out in order to create a bank account. After all the administrative stuff was over we decided to go out and have lunch together to get to know each other.

This site uses Akismet to reduce spam. Learn how your comment data is processed.